A top university must meet exceptionally high expectations for its design and function. Students, faculty, administrators and alumni expect world-class campus facilities that include the latest technologies – so when the University of Notre Dame initiated the largest building project in its history, it required a massive aV installation across multiple buildings and a historically significant stadium.

The University of Notre Dame, located in South Bend, Indiana, is consistently recognized as one of the leading institutions of higher learning in the United States for its undergraduate education, research and faith mission. The Fighting Irish football team, whose home turf is Notre Dame Stadium, is the nation’s most storied program.

The original stadium opened in 1930, with then-head coach Knute Rockne playing a major role in its design. Decades of campus expansion meant the stadium gradually evolved into one of the most centrally located facilities on campus – yet it was only used about 10 times each year.

In January 2014, the university announced plans to attach three new buildings to the stadium and revamp the stadium itself, adding about 800,000 square feet of classroom, research, student life, media, performance, meeting, event, faith and hospitality space to Notre Dame Stadium. This would make the iconic venue a year-round hub for academic and student life – and, of course, technology would play a major role in the upgrade.

An Eye on Technology

As with any world-class university, Notre Dame incorporates technology all over campus, from classrooms to student centers to hallways.

“Everybody today is immersed in technology, and by the time our students get to Notre Dame, they’ve had technology in their schools from elementary to high school,” said Jason Railton, manager of AV technologies for ND Studios, whose role is to design and consult on campus-wide new construction, major renovation and departmental AV requests. “We don’t want them to downgrade when they go to college, so we aim to ensure a tech-rich experience for students as well as guests and visitors.”

“We’re attempting to be at the forefront of universities when it comes to technology, so we have a set of core aV and technology standards,” he said. “This ensures the same user experience, no matter where you are in any Notre Dame-owned location – whether you’re on the main campus or in Rome, Ireland or Washington, D.C. – and also helps our team with troubleshooting.”

“I make sure the functionality is still being met, the price is within budget, the customer service and response time is what we expect, and the service/repair [options are appropriate],” he said. “all that goes into why we choose specific vendors for our campus standards.”

For flat-panel monitors and projectors, that core standard is NEC Display Solutions.

“Every project we’ve done in the last 12 years has been NEC,” Railton said. “It’s the campus standard, and while there is no mandate that says NEC exclusively must be used, we try to push NEC as we upgrade technology across campus.”

One reason Railton said his team likes NEC is the customer service. An example he cites from the stadium project: an external partner inadvertently specified an incorrect model for certain areas of the stadium, and the university purchased this model. By the time the issue was discovered, about 400 units had been unboxed and installed, with the packing materials discarded.

“NEC came out here within days of our discovering the issue and took back all 400,” he said. “Within a week, we had all new models and the price difference refunded – this is almost unheard of. NEC aims to take care of their customers, and they do.”

As they worked through the enormous aV installation project, Railton and his team learned some valuable lessons.

The planning process for the Campus Crossroads project began in early 2014, and ground broke for construction in November 2014.

The project involved adding three additional buildings to the stadium structure, as well as revamping the stadium itself. The structure’s exterior design was inspired by Knute Rockne’s original vision of Notre Dame Stadium (which still stands today as the core of the facility),as well as details that pay tribute to the Collegiate Gothic buildings on campus. The project incorporated sustainability practices such as LEED certification, green roofs and geothermal energy use.

On the west side of the structure, the Duncan Student Center houses student life, career placement and recreational/fitness/wellness facilities, including a climbing wall and gymnasium, as well as hospitality ballrooms and VIP suites, game day controls, and restaurants.

The south side of the structure features O’Neill Hall – the new home for the Music Department and the Sacred Music at Notre Dame program – and includes auditoriums, recital halls, classrooms and conference rooms, all using technology.

Corbett Family Hall, on the east side, contains the anthropology and psychology departments, as well as the state-of-the-art Rex and alice a. Martin Media Center.

The stadium itself also got a revamp:

Dispersed throughout the stadium and three buildings are approximately 600-plus NEC Display units, including large format displays, desktop displays, and projectors. This technology is used for “everything you can imagine,” Railton said, including in the press box, academic departments, classrooms, conference rooms, hospitality and VIP suites and student lounges, and for such purposes as menu boards, command and control, aV control systems, monitoring and more.

“Notre Dame Stadium has always been an icon, even if you’re not a Notre Dame football fan,” he said. “Now, even fans from or employees of competing college sports teams are amazed when they walk in and see what Notre Dame was able to accomplish with the Campus Crossroads Project.” 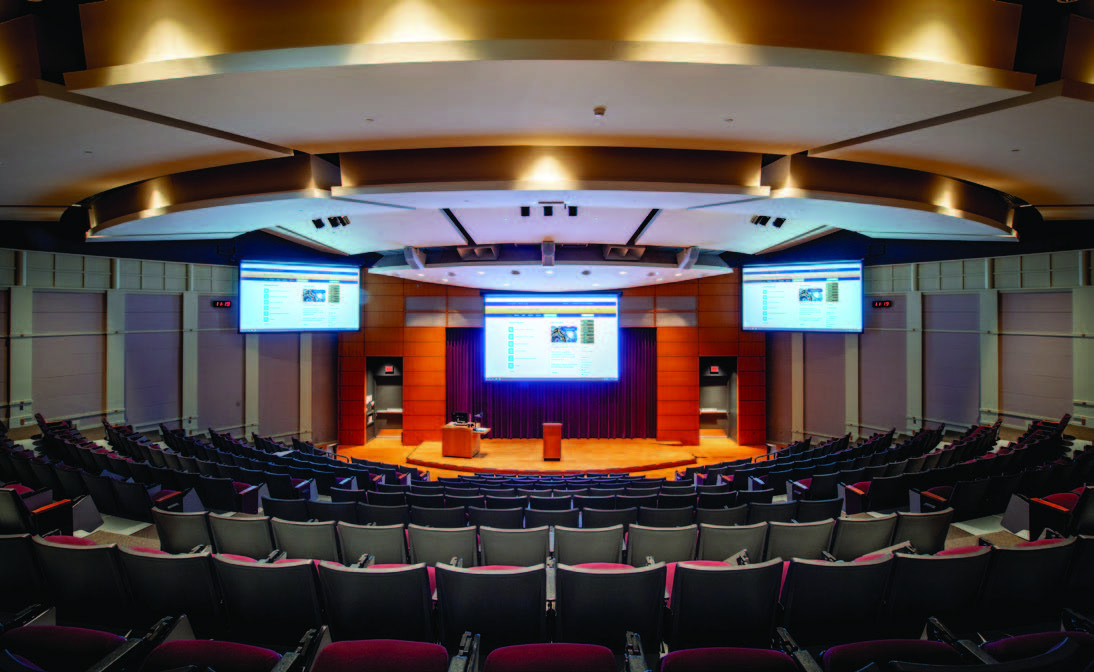 Previous Next
Have Questions?
Email a Sales Representative