Originally located in Oneonta, New York, and opened in 1979, the National Soccer Hall of Fame housed iconic soccer memorabilia and served as home for Hall of Fame induction ceremonies – until the facility closed in February 2010.

“And that just didn’t sit right with my brother Clark and me,” said Dan Hunt, president of FC Dallas, an american Major League Soccer club based in Frisco, Texas. “Not just because of our dad, [Lamar Hunt, who was inducted into the National Soccer Hall of Fame in 1982], but because there have been so many men and women who have contributed so much to the game of soccer. We wanted to revive the Hall of Fame and put it in a place where it could be successful.”

In 2013, the Hunt brothers, who co-own FC Dallas, launched a campaign to bring the Hall of Fame to Frisco and started initiating conversations with civic leaders. It was determined the project would be funded by a public-private partnership between FC Dallas, the city of Frisco, Frisco Independent School District and the U.S. Soccer Federation. However, part of the improvement involved reinstating the National Soccer Hall of Fame – not just reopening it, but completely reimagining it to be an immersive, high-tech experience that would draw fans of the sport to visit over and over.

To transform the National Soccer Hall of Fame into a personalized, interactive experience, in 2015, FC Dallas engaged two companies to design and create the exhibits: HealyKohler, a museum planning and exhibition design company, and Cortina Productions, a media design and production firm that specializes in location-based media for museums.

Terence Healy, owner and design principal at HealyKohler, added that visitor participation was a major focus of the museum’s goals. “We asked: What are visitors’ expectations for the National Soccer Hall of Fame?” he said. “Because it’s a sports museum, you want a lot of activity and participation, and if you’re a sports fan, you like a little bit of competition.”

“We created an experience where cameras can tell when a visitor is close to an exhibit, and the digital displays show personalized content to the visitor,” Dan Kaplan said. “as visitors walk through the Hall of Fame, they always see what’s most interesting to them.” 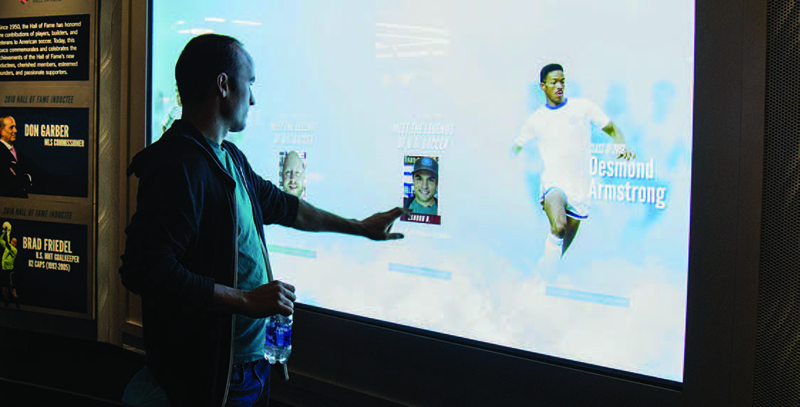 When it came time to install, FC Dallas hired Capitol Museum Services (CMS), a full-service exhibit fabrication and AV installation company. While the design phase prepared the team as much as possible for the installation, there were still some challenges to overcome.

In addition to building the exhibit infrastructure, the design team had to create mockups to ensure correct positioning. Considerations during installation included thinking about how each person would be approaching the display or projected image in each exhibit area. Lighting in the environment and the amount of reflective materials in the exhibit areas played an important part in deciding how to position each piece of equipment, including displays, projectors, projection surfaces, and even the cameras driving some of the interactive features. 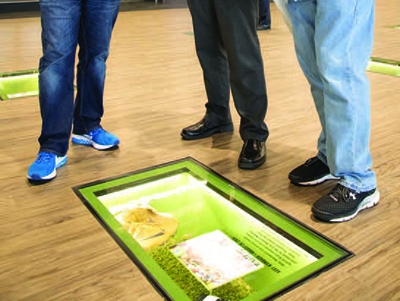 The museum experience begins in the Hall of Fame lobby, where visitors create a profile, answer questions about their favorite soccer teams, positions, and take a photo. This is used to personalize the experience as visitors move throughout the exhibit. Additionally, visitors’ scores from various games played throughout the museum, can be displayed on NEC digital displays throughout the day.

Motion-sensing cameras and virtual reality tech also allow visitors to juggle or kick a virtual ball into a goal, or reenact famous saves by players like Briana Scurry and Tim Howard, all played out on massive, ultra-high definition NEC displays like the NEC X981UHD-2.

Green screens allow visitors to place themselves into historic soccer photos, letting them celebrate wins with their favorite teams. Projection mapping technology using the NEC PX1005QL laser projector is featured in an exhibit that letting visitors design their own MLS jersey on an NEC touchscreen. The projectors map onto a manikin that shows what the jersey looks like, updating changes in real time. 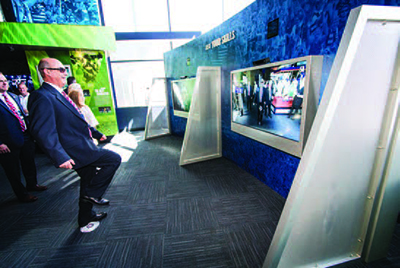 Similarly, visitors can test their knowledge of soccer and even design their own soccer team scarfs using stations built around E232WMT touchscreen monitors, supported by PA322UHD color accurate displays to ensure scarfs look just the way guests like, and X551UHD displays for additional feedback and engagement.

“We really appreciated our opportunity to work with NEC – they were really helpful and always willing to work with us to figure out how we could put the experience together,” Dan Kaplan said.

The beautiful exhibit created with NEC displays and projectors is one of a three part process for engaging visitors. In addition to interacting with the exhibits, the museum also uses the NEC Global Neoface facial recognition system to welcome visitors and personalize the experience.

Feedback from visitors has been overwhelmingly positive. Furthermore, the museum industry itself has taken notice of how NEC’s products have impacted the Hall of Fame’s visitor experience. The american alliance of Museums Media and Technology Network awarded the National Soccer Hall of Fame the 2019 Gold Muse award for Research and Innovation for its “seamless interaction with content by removing many of the physical barriers often associated with usability while providing opportunities for meaningful, curated learning.”

“We want people to go in and have a positive experience, and have that experience live on with them,” Hunt said. “Whether it’s the digital experience or a great classic artifact like the gold medals or Women’s World Cup trophy, [the museum] is helping more people fall more in love with soccer.”

Hunt added that his team remains in touch with various divisions of NEC and plans to continue adding NEC technology to the museum and stadium.

“There’s not a week that goes by that we don’t have meetings or calls with them about new technology,” he said. “We have a plan to implement additional NEC products, so you will see more and more of an integration over the next three or four years.”