Bravo Media Productions was looking to engage its current and prospective clients in an immersive interaction from the moment they stepped off the elevator into Bravo’s studio space. See what they did in this immersive case study. 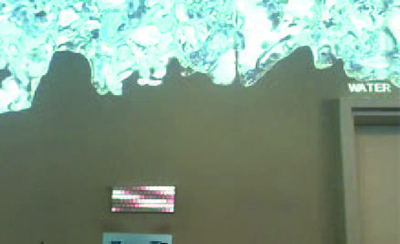 The power of projection

At Bravo, employees and visitors step off the elevator and immediately enter a world of imagination and endless possibilities. The moment the elevator doors open up, guests set their sights on the large visual façade in front of them – and that façade needed to make a strong first impression.

“Projection gives an element of surprise that you can’t get from any other medium,” said Tim Donovan, President of Bravo Media Productions. “When used to its fullest extent, it has the ability to create a sense of magic, leaving viewers wondering, how did they do that? It’s a technology that can provide an impactful experience regardless of the size of the installation and canvas you are working with.” 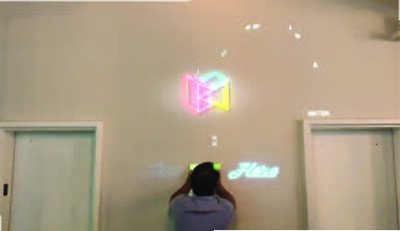 Not only does projection create magical experiences, it provides essential versatility and flexibility for the user. Bravo’s 360-degree projector setup allows for easy-to-change content that caters to whoever is walking in the door that day. Projection allows a customizable installation within any size or shape space without the cost of a custom installation project. To achieve a variety of projections that can rotate in content daily, Bravo installed six of the projectors in landscape mode and two of the projectors in portrait mode.

“We recommend projectors to so many of our clients because of the flexibility in creating content – it’s second to none,” said Donovan. “It’s a less expensive hardware option and can deliver that same impact – if not more – for the immersive experience clients are looking for today.”

The Bravo team pushes an often underutilized tool like the projector to its fullest extent, manipulating its capabilities to design productions with an artistic vision in mind. Their studio setup was made possible through the projector’s edge blending and projection mapping capabilities along with Bravo’s custom mapping plugin.

Don’t box yourself in

NEC’s projectors were chosen for Bravo’s studio because dollar for dollar when compared against competing products, their team determined they provided the most value and best performance in this category and had capabilities to project in the nonconforming sizes they needed. Donovan’s team also relied on Bravo’s history of using NEC products and the proven uptime and responsiveness of their customer service.

A projector offers so many more capabilities than just a 16x9 aspect ratio projection onto a screen. When dreaming up new digital possibilities for a space, event or production, it’s important to take all the capabilities of projection into consideration. Production teams could be missing a huge opportunity to innovate and create a visual illusion that moves the needles for their business.