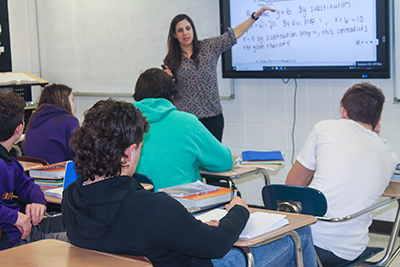 The Orangeville School District, near the border between Illinois and Wisconsin, consists of a single, pre-kindergarten through 12th grade campus. In order to provide a wide range of services to its students with relatively few facilities, the school’s staff were no strangers to resourceful approaches to education. Still, technology at the school lagged behind that of larger districts, with many teachers conducting lessons with whiteboards and transparency projectors.

In 2019, state-level officials declared that an aging boiler on the school premises was no longer effective, and that it would have to be removed. In addition, the school was already looking at a separate project to remove asbestos. In a creative stroke of genius, school staff crafted a plan that involved an alternative revenue bond and consolidating the campus into a single building. Not only was the school able to complete the necessary projects, but they were left with a surplus that allowed them to invest in the gym, vestibule, office areas, and classroom technology. 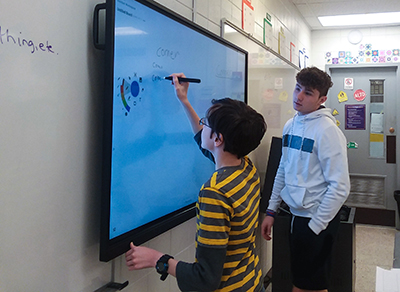 In the spirit of interactive learning and in addition to investments in Chromebooks and mobile labs, the school wanted to see where else they could invest in technology for students. That’s when Dr. Douglas DeSchepper, superintendent of the Orangeville School District, traveled to CDW in Chicago to see the latest in classroom technology. There, he discovered the NEC CB series collaboration boards and came up with an idea.

“What if our rural school district could be the first school district in the entire country to have 100 percent of its classrooms outfitted with collaboration board technology?” said Dr. DeSchepper. “NEC was the only vendor to pounce on that idea, and I was very impressed by their enthusiasm to make it happen.”

The robustness of the product was also a factor. Dr. DeSchepper noted that one of his school’s classrooms was already equipped with an NEC projector that had proven itself a solid investment with minimal maintenance and a long lifespan.

To make the most of their budget, the school employed a parent to set the units up over the summer, with installation and networking support provided by NEC.

The timeline for installing the CB boards had to fit with the other renovations the school was going through at the time, with construction beginning in april of 2019 and being completed by august, just in time for the beginning of the Fall session. Once the boards were delivered to the school, they were all installed over a single weekend.

Each classroom received one 65 inch CB651Q, and each teacher was consulted on where they would like for it to be installed in their classroom. The narrow design and ability to route cables behind the boards made selecting a location and mounting them a breeze.

Two remaining boards, one CB651Q and one larger CB861Q, were mounted to mobile carts to be moved throughout the school as needed. The 80 inch board was primarily used for staff development functions in the office areas and for community functions, where it could move between the multipurpose room, gym, cafeteria or media center.

Dr. DeSchepper was briefly concerned that training staff and students to use the collaboration boards would be a potential hurdle to their utilization, but in reality the students and staff found the boards to be highly intuitive, and any concerns about training quickly evaporated.

With the new CB boards in every classroom, students became more interactive with the teaching process. The boards were in constant use throughout every school day, and provided teachers the ability to integrate with other technologies in the classrooms, including their own computers and the students’ Chromebooks. Any lessons that were previously taught on whiteboards moved to the CB boards, with 2-3 students engaging with the boards at a time.

“Parents are impressed to see that we have this type of technology,” said Dr. DeSchepper. “This project took us from being behind to being ahead. Now we have people from other districts coming to our school and looking at how we did this.”

When it came to execution and post-purchase support, Dr. DeSchepper couldn’t help but express his pleasure at working with NEC. 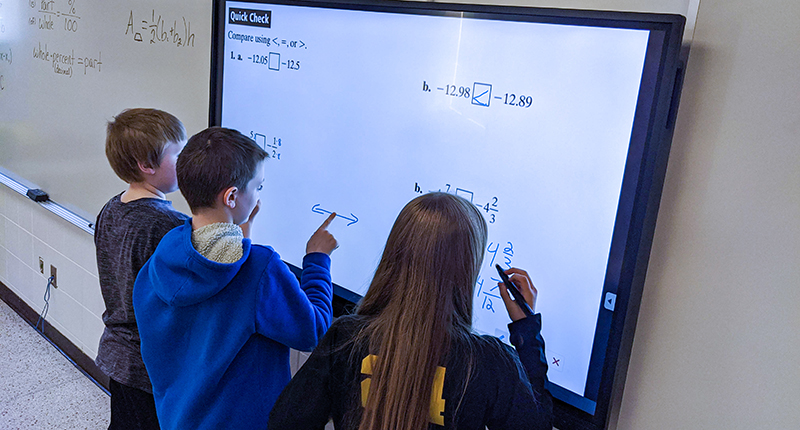